Do you enjoy brainteasers and puzzles? If so, FreePrintable.com has a number of games to get your mind going. In the Free Printable Games, you'll find crossword puzzles, jigsaw puzzles, word searches, brain teasers, mazes and more! Are you a fan of Bingo? Print your own boards and game pieces. Do you like Tic Tac toe and board games that allow you to make up your own rules? There are plenty of those, too. Kids and adults alike will like the cryptograms and codebreaker activities in the brain teaser section. Does your child like Spot the Difference activities? There are several of those, too. You'll never have to hear the phrase "I'm bored" again from your family members now that you have access to scores of fun games and activities that you can print off at home at no cost to you.

Sudoku is a wildly popular number game that has been around since the 1970s but burst onto the scene in a big way in 2005. If you're a fan of these number puzzles, you're not alone. People have been enjoying number puzzles since the early 19th century when they were published in French newspapers. Now, Sudoku puzzles can be found in our own newspapers, in magazines, online and even in children's activity books. Everyone loves these little puzzles! You'll find a range of difficulty levels here with free printable Sudoku puzzles for kids and adults. The Sudoku puzzles for kids feature 16 squares instead of the larger puzzles designed for adults. This means that everyone in the family can sit down with a Sudoku puzzle after dinner and enjoy some quality time together. No more sitting in front of the television!

Are you tired of your kids spending hours in front of the television after school? It's not only a bad habit, it's an unhealthy one. Watching too much television leads to decreased physical activity, increased appetite, and reduced mental function. In some children, it also causes problems with focus and attention. Rather than allowing your child to watch TV for hours, keep him or her occupied with fun and interesting activities like this free printable Sudoku puzzle for kids. Number games like Sudoku have a number of benefits for your mental health. First, they improve a person's ability to analyze situations critically. This improves your child's problem solving abilities by engaging their minds in thoughtful processes. Completing Sudoku games can also increase your child's ability to focus both at home and at school. The more a child practices focusing on a particular task, the better he will be able to channel that ability when it comes to his schoolwork. Finally, it keeps children from less productive activities like watching television and playing video games. The mental exercise should help give your child's brain a good workout without the over-stimulation that results from all the colors and lights in computer monitors and television screens. 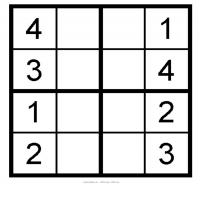