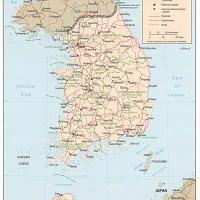 This map features the international and provincial boundaries, national and provincial capitals and major roads of the South Korea, officially the Republic of Korea. It is neighbored by China, Japan and North Korea. Its capital is Seoul, the 2nd largest metropolitan city in the world. Korea has the 2nd largest advance economy in Asia and the 13th largest in the world.