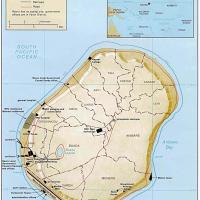 This map features the international and provincial boundaries, national and provincial capitals and major roads of the Republic of Nauru and formerly known as Pleasant Island. It is an island nation in the Micronesian South Pacific. The nearest neighbour is Banaba It is the world's smallest island nation, the smallest independent republic, and the only republican state in the world without an official capital. The capital city is Naren. The official language is English and Nauruan.