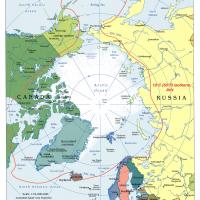 This map features the territorial claim of Arctic Region. It is located in the North Pole. The region includes the Arctic Ocean and parts of Canada, Greenland, Russia, Alaska, Iceland, Norway, Sweden and Finland. The Arctic region consists of a vast ice-covered ocean. The word Arctic comes from the Greek αρκτικός (arktikos), "near the Bear, arctic, northern"[1] and that from the word άρκτος (arktos), which means bear [2]. The name refers to the constellation Ursa Major, the "Great Bear", which is prominent in the northern portion of the celestial sphere.